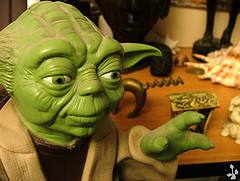 A late but warm thank you to people adding sins to the list:

I would add to your list a reluctance by gurus to reveal their sources. Miraculously great ideas materialise from nowhere.

Failure to Validate: I can’t tell you how many of these folks come up with some statistically valid observations based on a qualitative study or deep dive on internal data, but never go to the trouble of validating it. “We interviewed 150 people and found these three factors were most important to them in the way they buy X”…but then they never go to the trouble of hypothesis testing or examining the variables in the real world! They just write-up a new book, register a trademark, develop a few seminar slides, and hit the speaking circuit.
Testing for Scale: And how many times have we read recently that Webinars are more efficient than trade shows? PR is more efficient than advertising? Blogging is more efficient than PR? And, then read sweeping declarations, quoted in all the best magazines, that obviously the leader on that function should “have a seat at the table”, and how every company should move all their wasted Wannamaker money into these more effective “strategies”? Yet, how many times does someone say, Gee, how much can that idea scale? or at what point doesn’t it work? How many email blasts are too many? Will 1000 more pr people really increase our revenue? How many blogs can a company meaningfully produce before everyone is stepping all over each other?

Cool follow-ups included David Maiser (strong comments in the discussion over there), and an interesting off-topic musing by Ken Boasso.

And in case you’re wondering about the Kawasaki Effect – in the two weeks following Guy’s post about 7000 new people visited this blog.
An unpredictable but awesome side effect also that this list was translated to other languages!
What can I say? The two years and a bit it took me to move from decision stage to actually getting this blog online are probably the most irresponsible thing I have done throughout my career.

Long term effect – the RSS counter broke the 200 barrier, which is really the highest compliment I could hope for.
Thank you for your attention, I will do my best to make it worth your while…